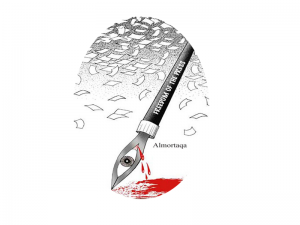 We / 19bh Group / A Bahraini journalists, intellectuals, filmmakers, artists, media, and supporting and sustaining personalities; condemn silence of associations for the defense of its members on the fate of this segment of the Bahrain people, after a year of political crisis that gripped the country, where members of this group of people faced questioning, arresting and harassment, defamation and unfair dismissal and torture. Three died, many of them no longer at work as recommended by the Bahraini Royal Commission to investigate the facts, as some has returned to their jobs and found themselves marginalized and without their offices, their powers, and salaries. On the basis of Article 19 of the International Covenant on Civil and Political Rights "that everyone has the right of freedom of expression, and that this right includes freedom to seek various forms of information and ideas, receive and impart to others." So we see that the charges against the journalists and intellectuals all were contrary to the principle of the most important principles of human rights of freedom of expression guaranteed by the Constitution of the Kingdom of Bahrain and the national laws and the law of printing, publishing and national treaties and conventions ratified by the Kingdom, hence; we call upon the following:

1- Return all dismissed from the field of media technicians and directors to their past positions and compensate them for losses incurred and rehabilitation of physical and moral support to them as stated in the recommendations of the Bahrain Independent Committee fact-finding, and to stop the decision to prohibit their employment in any place, and from any Gulf country to another, while ensuring paying them their entitlements under the un-employment insurance program.

2- Achieve a modern and advanced law to the press and remove materials that hamper freedom of expression and the abolition of imprisonment of journalist and terminate any link to the Penal Code.

3- Expose violations of freedom of expression and interference in the exercise of professional and trade union work, and prevent broadcasting material that hatred and discredit journalists, writers, and artists, and stop all forms of programs and scripts of degrading and abusive.

4- Follow-up issues of journalists and writers brought to the local courts about abuse against journalists caused previously by the local media, as well as domestic and foreign channels.

5- Cease all procedures and laws that restrict freedom of opinion, or control over the media.