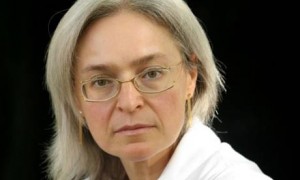 On the fifth Anniversary of her assassination, PEN International calls for justice for murdered journalist Anna Politkovskaya.

Today will mark the fifth anniversary of the murder of acclaimed journalist, author and human rights advocate Anna Politkovskaya - shot dead in the elevator of her Moscow apartment on Saturday 7 October 2006. To mark the occasion PEN International is renewing its calls on the Russian authorities to end the impunity of those responsible for the killing.
Although there have been recent indications that some progress is finally being made in the investigation into the murder, much more is required to ensure that those responsible are brought to justice. PEN International calls on the Russian authorities to ensure a full and impartial investigation in order to identify those responsible.
"We honour Anna Politkovskaya's memory with vigilance and we insist upon justice for her," said Marian Botsford Fraser, Chair of Writers in Prison Committee of Pen International, "She was a fearless defender of the truth, and so we must continue to demand the truth behind her murder".

Trial and recent developments:
“I am just one human being among many, a face in the crowd… I live in the present noting down what I see”.
Anna Politkovskaya, Introduction to Putin’s Russia (2004)

On 7 October 2006, the body of Anna Politkovskaya, special correspondent for the Russian newspaper Novaya Gazeta, was found in the lift of her Moscow apartment. She had been shot in the head; executed in what was clearly a contract killing.

The trial of three men accused of carrying out the killing, Rustam Makhmudov, Dzhabrail Makhmudov and Sergei Khadzhikurbanov, began on 17 November 2008. All three were acquitted due to a lack of evidence on 19 February 2009 after a trial which has been described as seriously flawed.

However, in May this year, one of them, Rustam Makhmudov, was rearrested and three months later, in August, the former head of surveillance at Moscow’s Main Internal Affairs Directorate Lt. Col. Dmitry Pavlyuchenkov was also detained. Furthermore an already convicted criminal, Lom Ali Gaitukayev was also named as having been involved.
Gaitukayev is said to have been approached by an as yet unidentified person in 2006 and contracted to carry out the murder, and reportedly then set up a gang to commit the killing, which included the three people who had been previously been acquitted of the crime, and Lt Col. Pavluyuchenkov. Pavluychenkov is said to have ordered his subordinates to follow Politkovskaya and identify her schedule and commuting routes and then shared this information with the other members of the gang. It was further claimed that he passed the murder weapon from Gaitukayev to the suspected gunman Rustam Makhmudov.

Despite this apparent progress in the case it remains unclear whether the investigative committee plans to charge Gaitukayev in connection with the killing and the identity of those who approached him in order to carry out the murder still remains unknown.

Anna Politkovskaya had been receiving threats since 1999 when she began chronicling the alleged human rights abuses by the Russian armed forces in Chechnya. However, she continued to cover the conflict, publishing A Dirty War: A Russian Reporter in Chechnya in 2001 and A Small Corner of Hell: Dispatches from Chechnya, 2003. She has also been a highly vocal critic of Vladimir Putin, describing the then President as a ‘power-hungry product of his own history in the armed forces’, in her powerful 2004 book Putin’s Russia[ #_ftn1 ][1].
Politkovskaya’s work led to severe harassment at the hands of the Russian authorities. For example, in 2001, while reporting in Chechnya, Politkovskaya was detained by military officials in the village of Ishettuni, who threatened to torture and rape her and subjected her to a ‘mock execution’. In 2002 she one of the few outsiders allowed into a Moscow theatre in an attempt to negotiate with Chechen rebels the release of hundreds of hostages held there.

PEN International is a leading cultural and advocacy organisation which celebrates literature and promotes freedom of expression. Founded in 1921, our global community of writers now comprises 144 Centres spanning more than 100 countries. Our programmes, campaigns, events and publications connect writers and readers for global solidarity and cooperation. PEN International is a non-political organization and holds consultative status at the United Nations and UNESCO.