Free speech and human rights organisations call for Turkish novelist Ahmet Altan, Nazlı Ilıcak and other journalists to be released 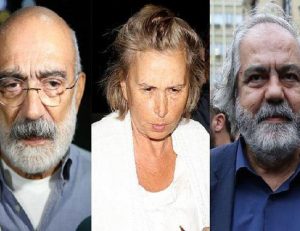 Ahead of the second hearing in the retrial of Turkish novelist Ahmet Altan, Nazlı Ilıcak and four other journalists and media workers, ARTICLE 19 and 16 free speech and human rights organisations call for all detained defendants to be released and for the charges to be dropped. We believe that the charges against Altan and the other defendants are politically motivated and the case should never have gone to trial.  We believe that the new charges are also bogus, as no credible evidence has been presented linking the defendants to terrorism.

Altan and Ilıcak have been in pre-trial detention for over three years on bogus charges. They were initially charged with sedition and are now being re-tried on terrorism charges following a decision by the Supreme Court of Appeals. The final prosecutor’s opinion has been published ahead of the hearing on Monday 4 November, revealing that the prosecutor will ask for the judge to sentence significantly above the minimum required sentence for these offences. If the judge rules in line with the Prosecutor’s opinion, this will mean that the defendants will remain in detention during the appeals process which could take many more months. The on-going violation of their rights is a damning indictment of the state of Turkey’s judicial system, which has been placed under immense political pressure since the failed coup of July 2016.

We have serious concerns regarding the panel of judges overseeing this retrial. It will  be presided over by the same judge who oversaw the first trial, which involved several violations of the right to a fair trial and according to the Bar Human Rights Committee,  “gave the appearance of a show trial”.  The same panel of judges also previously refused to implement the Constitutional Court and European Court of Human Rights rulings that Mehmet Altan’s rights had been violated by his pre-trial detention, sparking off a constitutional crisis.

With the Constitutional Court failing to find a violation in the case of Ahmet Altan and Nazlı Ilıcak in May 2019, we look to the European Court of Human Rights (the Court) for justice. In 2018, the Court found several violations of Mehmet Altan's rights. The Court also said that it would keep the effectiveness of remedies before the Constitutional Court under review. Altan and Ilıcak have now spent over three years in pre-trial detention. If the judge rules on Monday in line with the Prosecutor’s final opinion, they will be condemned to an even longer period of unjustified detention. By January 2020, their applications before the Strasbourg Court will have been pending for three years. A judgment from the European Court of Human Rights on their cases is now crucial.

The retrial in the case of writers and media workers Ahmet Altan, Mehmet Altan, Nazlı Ilıcak, Yakup Şimşek, Fevzi Yazıcı and Şükrü Tuğrul Özşengül began on 8 October 2019, after the Supreme Court of Appeals overturned their convictions of “attempting to overthrow the constitutional order through violence and force” under Article 309 of the Turkish Penal Code, for which they had been given aggravated life sentences. The Supreme Court of Appeals found that there had been no evidence of their use of “violence and force” and that Mehmet Altan should be acquitted entirely due to lack of sufficient evidence. The charges for the other five defendants were reduced: Ahmet Altan and Nazlı Ilıcak face new charges of “aiding a terrorist organisation” while Yakup Şimşek, Fevzi Yazıcı, Şükrü Tuğrul Özşengül face charges of “membership in a terrorist organisation”. Their re-trial, on new charges, began in October 2019 and the second hearing, at which the judge may rule on the case is on November 4, 2019.

Freedom of expression in Turkey

Under President Erdogan’s rule, freedom of expression has severely declined in Turkey. Over the last four years at least 3,673 judges and prosecutors have been dismissed and the judiciary effectively purged of anyone who is perceived as opposing the government through the exercise of freedom of expression. Around 170 media outlets have been closed down over claims they spread “terrorist propaganda”. Only 21 of these have been able to reopen, some of them however being subject to major changes in their management boards. Turkey has become the world’s biggest jailor of journalists with at least 121 journalists and media workers currently in prison and hundreds more on trial.