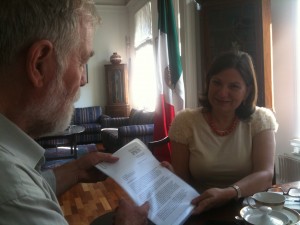 The Assembly of Delegates of PEN International, meeting at its 77th World  Congress in Belgrade, Serbia, 12 September to 18 September 2011

PEN International is saddened, deeply worried and angry over the continued violence against journalists and writers, and particularly over the impunity which prevails despite numerous assurances of investigation and respect for freedom of expression.

PEN International’s Congress in Belgrade condemns the lack of action from the Mexican government to stop killings of journalists and writers.

Mexico has not only become one of the most dangerous countries in the world for journalists, it has also become a champion in impunity. Since January 2004, 42 print journalists and two writers have been murdered, while 10 print journalists have gone missing in the same period. Seventeen of the killings and four of the disappearances have occurred since January 2010, and an increasing number of journalists have been threatened, harassed and attacked amidst an atmosphere of growing violence. Furthermore few if any of these crimes have been properly investigated or punished, leaving the authors of the crimes free to strike again.

The Assembly of Delegates of PEN International is saddened and outraged by the continued murders and disappearances of journalists and writers, by the continued threats and harassment against them and by the Mexican authorities’ notorious passivity in investigating these crimes. The state seems to lack the will to protect journalists and writers in danger, even after they have received explicit threats.

This stands in a grotesque contrast to official Mexican discourse which presents Mexico as a human rights champion. Mexico has signed and ratified more than 20 human rights treaties and considered more than 1,000 recommendations from various national and international human rights organizations. That is the humane façade the Mexican government presents to the world.

An increasing number of delegations from international organizations and institutions have visited Mexico in recent years to investigate and protest the continued and increasing violations of human rights and freedom of expression. The government has responded with toothless reforms and a rhetoric of high-sounding recommendations, a strategy which according to the report Corruption, Impunity, Silence: The War on Mexico’s Journalists, published in a joint effort by the Faculty of Law at the University of Toronto and the Canadian Centre of PEN International, has led to more deaths, human rights violations and limitations on freedom of expression (the report is available in both English and in Spanish.

In 2006 a special prosecutor’s office for attention to crimes committed against freedom of expression, FEADL (Fiscalía Especial para la Atención de Delitos Cometidos Contra la Libertad de Expresión), was created, and in July 2010 further strengthened as a response to  increasing pressure and criticism. However, this apparently encouraging initiative has proven to be hollow and all but worthless. The special prosecutor has no formal powers to investigate crimes or to lay charges and since its creation the office has averaged only one prosecution a year. Thus crimes against freedom of expression remain unpunished. The special prosecutor’s office is an insult to the victims.

When journalist and writer Lydia Cacho Ribeiro published her 2005 book on child pornography in Mexico (Los Demonios del Edén: el poder detrás de la pornografía – The Demons of Eden: the power behind pornography), she was illegally arrested, detained, abducted and ill treated before being subjected to a year-long criminal defamation lawsuit. She was cleared of all charges in 2007, but her attempts to gain legal redress for her treatment have been thwarted and she continues to be the target of harassment and threats. On 14 June 2011 Cacho again received anonymous death threats. Mexican authorities have failed to take adequate measures to protect Cacho, who believes that the threats, which made direct reference to her journalism, stem from her naming alleged sex traffickers in her writings.

In 2009 the Inter-American Commission on Human Rights (IACHR), hearing of her harassment and monitoring by armed men outside her apartment, granted Cacho precautionary protective measures and asked the Mexican government to take action to protect her. However, to date reportedly only half of the measures have been implemented. With the new threats, she clearly remains at risk. The Assembly of Delegates of PEN International strongly demands that the Mexican government fully and immediately implement the mechanisms for journalists that it promised in November 2010.

Lydia Cacho’s case is far from an isolated one. The fact that two Mexican journalists were murdered and another was abducted the same month that she received the latest threats is clear evidence that these must be taken seriously and not only met with more hot air declarations from politicians and authorities.

On 7 June 2011 news editor for the daily paper Novedades Acapulco, Marco Antonio López Ortiz (42) was reportedly kidnapped in Acapulco, Guerrero state. That night he left work and was later assaulted on the street by unidentified men who took him away. Among other duties, López Ortiz was responsible for overseeing the paper’s coverage of crime. According to local journalists, they are constantly threatened by organized crime groups to keep coverage to a minimum. Novedades Acapulco’s reports on crime are accordingly kept brief and do not probe the facts reported, in order to avoid angering and being targeted by the groups.

On 13 June 2011 Pablo Ruelas Barraza, journalist for the regional daily newspapers Diario del Yaqui in Huatabampo and El Regional de Sonora in Hermosillo, both in Sonora state, was found dead on a street in Huatabampo. He had apparently been shot by two gunmen who had first attempted to abduct him. Ruelas (38) had received death threats from both politicians from both Sonora and criminal groups, according to local media reports.

In the early hours of 20 June 2011 unidentified gunmen broke into the house of Notiver columnist and editor Miguel Ángel López Velasco in Veracruz, Veracruz state, killing López Velasco (55), his wife Agustina Solano de López, and their son Misael (21). López Velasco was a well known journalist whose column for the daily, “Va de Nuez”, written under the pseudonym Milo Vela, dealt with politics, police and security issues. Local journalists have suggested that the killings could be retaliation for a recent column about drug trafficking in the region. López was the second journalist to be found dead in Veracruz state in June, following the appearance on 1 June of the body of La Verdad de Jáltipan columnist Noel López Olguin, who went missing on 8 March.

take efficient steps to end impunity, to investigate the murders, disappearances, threats and harassment of journalists and writers, to bring those responsible for